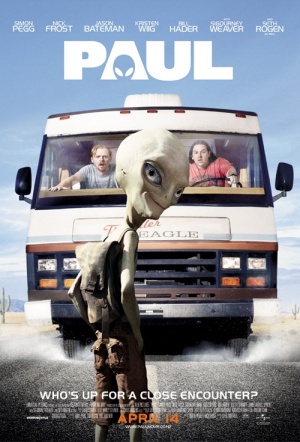 For the past 60 years, Paul has been hanging out at a top-secret military base. For reasons unknown, the space-traveling smart-ass decides to escape the compound and hop on the first vehicle out of town (which happens to be Graeme and Clive's RV). Chased by federal agents (including Jason Bateman) and the fanatical father of a young woman that they accidentally kidnap, Graeme and Clive hatch an escape plan to return Paul to his mother ship.

Directed by Superbad's Greg Mottola, from a story by Pegg and Frost.

Part bromance, part sci-fi spoof and all a bit disappointing.

Aliens, geeks and Pegg and Frost back on screen - how can it go wrong?

The geek brothers travel across the world only to find themselves. The resulting road movie is fondly indulgent rather than inspired, breezy but broad and indicative of treasured talents coasting.

Simon Pegg and Nick Frost are on disappointing form in a sci-fi comedy that never reaches the heights of Shaun of the Dead or Hot Fuzz...

Here's a movie that teeters on the edge of being really pretty good and loses its way.

Take me to your comedy...

Broader and more accessible than either Shaun Of The Dead or Hot Fuzz, Paul is pure Pegg and Frost - clever, cheeky and very, very funny. You'll never look at E. T. in the same way again.

It's a terrific idea, and Simon Pegg, Nick Frost, and a stellar cast of - mostly - Saturday Night Live alumni come very close to making it into a terrific movie.