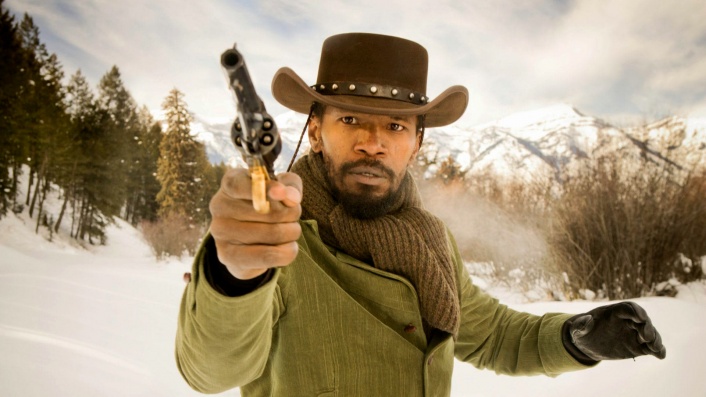 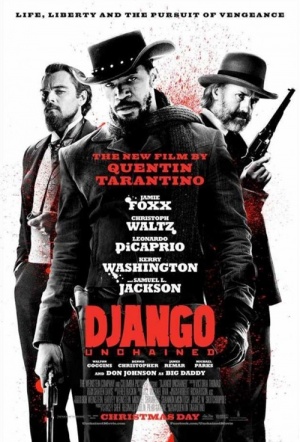 Quentin Tarantino's Western about a freed slave (Jamie Foxx) who becomes a brutal gun-for-hire. Working alongside a German dentist/bounty-hunter (Christoph Waltz in an Oscar-winning role), Django is determined to rescue his wife from a merciless plantation owner (Leonardo DiCaprio). Winner of Best Screenplay at the Golden Globes and Academy Awards.

Bounty hunter Dr. King Schultz rescues Django from slavetraders in the hope he can identify a high-paying target. After assisting Schultz he is given his freedom, but Django - having revealed a great talent for bounty-hunting - stays with the good doctor to form a more permanent partnership. In return, Schultz will help in the mission to Mississippi to face plantation owner Calvin Candie (DiCaprio) and free Django's wife (Kerry Washington). Samuel L. Jackson co-stars as Candie's house slave Stephen, and the film's supporting roles and cameos include appearances by Don Johnson, Jonah Hill, James Remar and more.

Might be too much - and too bloody - for certain constitutions, but the rewards are plentiful. Be sure to hunt it down.

It is digressive, jokey, giddily brutal and ferociously profane. But it is also a troubling and important movie about slavery and racism.

I can't wait to see this again.

Grandiose and pragmatic, Tarantino plays freely with implausibility, he gets his customers inside the tent and then gives them a carny show they're hardly prepared for. He is a consummate filmmaker.

Tarantino is a man unchained, creating his most articulate, intriguing, provoking, appalling, hilarious, exhilarating, scathing and downright entertaining film yet.

Tarantino injects the weighty material with so many jocular, startling and unexpected touches that it's constantly stimulating.

Another strong, sparky and bloody entry in the QT canon.

Tarantino's sure-footed, gorgeously shot, darkly funny Western starts strong and gains in momentum until a breathtaking climax that represents the apogee of his adventures in culture-mashing.