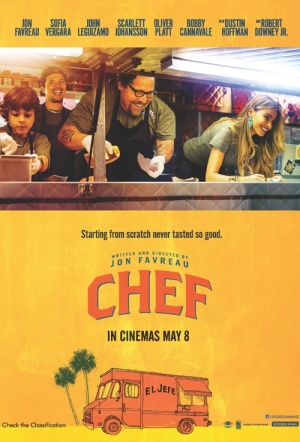 Jon Favreau (Swingers) writes, directs and co-stars alongside Scarlett Johansson, Dustin Hoffman and Robert Downey Jr in this culinary comedy. After Carl (Favreau) loses his restaurant job, he starts up a food truck in an effort to reclaim his creative promise.

"When Chef Carl Casper (Favreau) suddenly quits his job at a prominent Los Angeles restaurant after refusing to compromise his creative integrity for its controlling owner (Hoffman), he is left to figure out what's next. Finding himself in Miami, he teams up with his ex-wife (Vergara), his friend (John Leguizamo) and his son (Emjay Anthony) to launch a food truck. Taking to the road, Carl goes back to his roots to reignite his passion for the kitchen." (SXSW Festival)

Like Sam Raimi with Drag Me to Hell, Chef represents a mega director (in this case Iron Man's Jon Favreau) returning to the flavour of his early work (in this case, Swingers and Made) to rejuvenate his storytelling juices. And like Drag Me to Hell, it serves as a hearty reminder of why the director has been so successful.

The film belongs to Favreau in every sense, and his father-son relationship with Percy is at the heart of the film's heart.

There's family-friendly fluff here, sure, but this dish has considerable bite.

You become so thoroughly steeped in Casper's day-to-day routine that there are few dull spots.