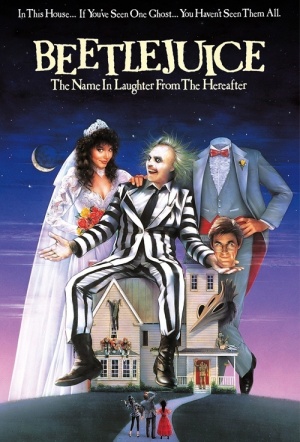 Tim Burton’s second feature. Recently-deceased couple the Maitlands (Alec Baldwin and Geena Davis) are now ghosts, learning the rules of the afterlife and preparing for their mandatory haunting of their marital home.

When an annoying yuppie couple move in, along with their goth daughter Lydia (Winona Ryder), the Maitlands prove ineffective in scaring them out. Lacking experience in the scare department, they hire the ‘ghost with the most’, Beetlejuice (Michael Keaton) – a 'bio exorcist' and specialist spooker. Lydia's presence complicates matters as she forms an unlikely friendship with the Maitlands, while also finding her teenage self the target of Beetlejuice's lecherous intentions.

The wild effects (a mix of in-camera trickery and stop-motion animation) were BAFTA nominated, while the film’s make-up artists won the 1989 Oscar.

Beetlejuice gets off to a start that’s so charming it never lives it down. The movie is all anticlimax once we realize it’s going to be about gimmicks, not characters...

The joy of Beetlejuice is its completely bizarre - but perfectly realised - view of the world.

(Beetlejuice) is about as funny as a shrunken head - and it happens to include a few.

Off-the-wall humour and some sensational sight gags make the movie, maddeningly disjointed though it sometimes is, a truly astonishing piece of work.

In the script... things above ground aren’t nearly as inventive as they are below.

No other movie in (Burton's) entire filmography stands as successfully on the precipice of mundane surrealism and candy-coated gothic whimsy.

It's an experience, rather than another helping of the same old thing.

Amazingly, it all still feels fresh, even though Burton has since become something of his own franchise since.

The story almost comes off the rails, but Beetlejuice's charm lies more in the execution.