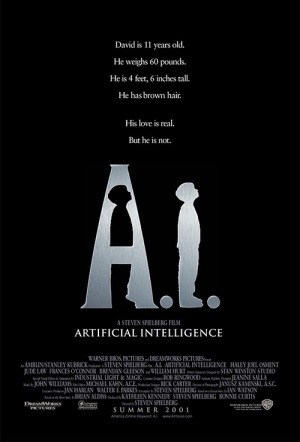 Set in a futuristic post-climate change society, A.I. tells the story of David (Osment), a childlike android uniquely programmed with the ability to love. Before his adopted family are done testing him, David sets out on his own to pursue his dream of becoming human and to understand the secret to his existence.

Development of the film initially began with Stanley Kubrick in the early 1970s. The project languished as Kubrick wasn't confident that the CGI technology of the time could create the character of David, whom he believed no child actor would be up for playing. Kubrick then handed the project to Spielberg in 1995.

Temperamentally, Spielberg and Kubrick are such polar opposites that A.I. has the moment-to-moment effect of being completely at odds with itself.

At heart it's a terribly anguished expression of rejection, loneliness and love. If only it knew when to stop.

The best fairy tale - the most disturbing, complex and intellectually challenging boy's adventure story - Mr. Spielberg has made.

A movie both wonderful and maddening.

A not quite seamless, not completely satisfying but invariably attention-grabbing combination of divergent themes, genres and even story lines.