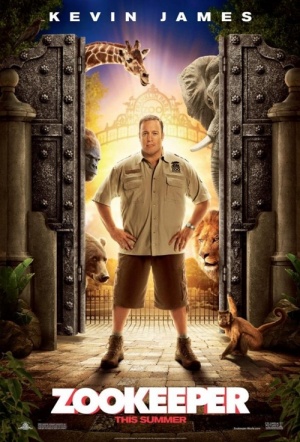 Family comedy in which the animals at a zoo decide to break their code of silence (think Night at the Museum at a zoo).

Finding himself more comfortable with a lion than a lady, zookeeper Griffin (Kevin James, I Now Pronounce You Chuck and Larry, TV's King of Queens) decides the only way to get a girl in his life is to leave the zoo and find a more glamorous job. The animals, in a panic, decide to break their time-honored code of silence to keep Griffin from leaving, and teach him the rules of courtship - animal style.

Also stars Rosario Dawson and features the voices of Cher as the giraffe, Adam Sandler as the monkey, Sylvester Stallone as the lion and Jon Favreau as the bear.

A comedy whose cliché-embracing stupidity borders on the surrealistic.

Ultimately, it's a marketing pitch in search of a movie that proves punishingly flat.

The director, Frank Coraci (The Wedding Singer), doesn’t impose much discipline, letting some scenes run wild and others peter out, their punch lines dangling.

I would rather lie on a bed of nails watching Dr Doolittle for a week than see a single reel of Zookeeper again.

Look, a great movie this is not. A pleasant summer entertainment it is.

Zookeeper" barely avoids a zero-star rating because of James. The bulky former star of "King of Queens" is impossible to hate no matter how much dumb slapstick he and his stunt double are required to perform.

The movie is more of a genre-fortified enclosure than a comic idea that gets to run wild.

Beastly comedy for the lowest of brow.

Zookeeper (I can't believe I'm even writing this) is a dumbed-down Paul Blart.

Some sparks of comedy and fun but largely a flat and unrewarding comedy.

As a study in insanity, Zookeeper is mildly interesting. But as a kiddie comedy, it’s something to watch only once the little ones have worn out their Dr. Doolittle DVD.