Weekend of a Champion 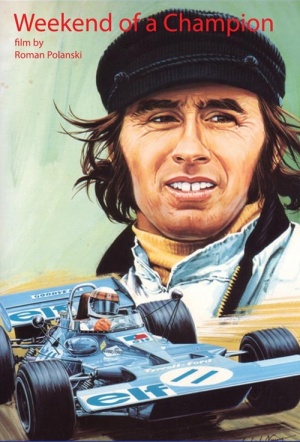 Roman Polanski's up-close-and-personal documentary of Formula 1 legend Jackie Stewart, intimately/strangely portrayed wearing his underwear for hotel room conversations with Polanski as well as where petrolheads expect to see him – screaming down the racetrack. Shot in and around the 1972 Monaco Grand Prix.

Employing on-board cameras and a running commentary from Stewart as he rips around the Monaco course, Weekend of a Champion offers a detailed look at the technique of a master driver. Polanski oversaw a restored version to screen at Cannes 2013, with a new 10-minute coda added in which present-day Polanski and Stewart sit in the same Monte Carlo hotel suite and reflect on the film.

Weekend of a Champion / Reviews

Even racing aficionados might find the chitchat a little vague.

Will appeal mostly to motor-racing enthusiasts and movie archaeologists.

I wonder if there isn't something a little bit placid and self-satisfied about the film, which is paced remarkably slowly, given the subject matter.

Takes audiences close enough to the brink of oblivion to really drive home what a remarkable accomplishment that represents.

Begins as a motorsports movie but ends up a portrait of two wily elder statesmen who have survived into their seventies by skill, stealth and sheer luck.