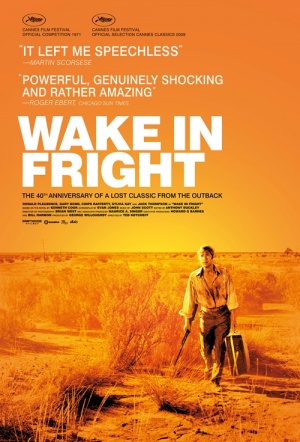 Classic, brutal Australian drama, nominated for the Palme d'Or in 1971 and winning recognition at the same festival in 2009 as a Heritage Film. The story of John Grant (Garby Bond), a bonded teacher who arrives in a rough outback mining town, planning to stay overnight before catching the plane to Sydney. But, as his one night stretches to five, he plunges headlong toward his own destruction.

Believed lost for many years, Wake in Fright was restored by Australia's National Film and Sound Archive. Says Canadian director Ted Kotcheff: "For years the negative of Wake in Fright was thought to be lost and gone forever... its final discovery, in Pittsburgh of all places, in a box marked 'for destruction' sounds like a film-maker's fantasy. The relentless lead detective that found it was also the film's editor, Anthony Buckley; he has served me brilliantly twice now. The loss of the negative would have been a knife in my heart as Wake in Fright is one of my proudest achievements.

"It was the last film of the great Australian cinema actor Chips Rafferty and the first film of the outstanding Jack Thompson... The Australian crew were young, talented, enthusiastic, fun and daring. It was one of the happiest experiences in my career. I loved the outback with its unearthly colours and shapes, the courageous people who lived in its inhospitable circumstances, the town of Broken Hill and the men there who befriended me, the two-up schools I became addicted to. For years I looked for a subject that would take me back to make another film in the outback but it was not to be. But I have Wake in Fright so close to my heart."

Shocking, credible and hard to forget.

Kotcheff's beware-the-backwoods thriller takes an unholy pleasure in watching Bond, an actor who always looks as if he's just bitten into a maggot-filled peach, devolve from full frontal dude-ity into a beast.

There is queasy undercurrent of sentimental kindness and indulgence beneath the violence.

It is powerful, genuinely shocking and rather amazing.

Has a potent, distinctive creepiness.