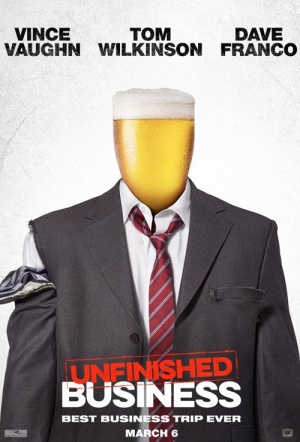 Comedy starring Vince Vaughn as the leader of a small business who - alongside his associates Dave Franco and Tom Wilkinson - heads to Germany to close the deal of his life. The plan quickly goes off the rails in every way imaginable - including unplanned stops at a sex fetish event and a global economic summit.

Ask yourself this: When was the last time Vince Vaughn played a different character? Don't get me wrong, I love Vince Vaughn. Very charming. Very clever. Very tall. But it's reaching the point where "lazy Vince Vaughn comedy" is becoming a tautology.

Awkwardly wrapping a heartwarming message of self-acceptance in a layer of crude sexual humor, it's like a date who tries to pat you on the back with one hand while feeling you up with the other.

This limp, sometimes lifeless business-trip comedy can’t decide whether to aim for teenage boys or their fathers. So it plumps for – and misses – both.

Unfinished Business aspires to high-spirited antics, but it feels defeated and exhausted from the very start.

Will seem woefully familiar to most anyone who's been to a movie theater - or taken a long plane ride - over the past 10 years.