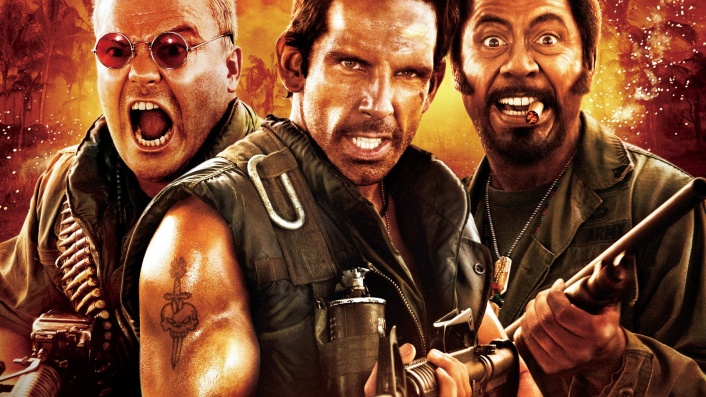 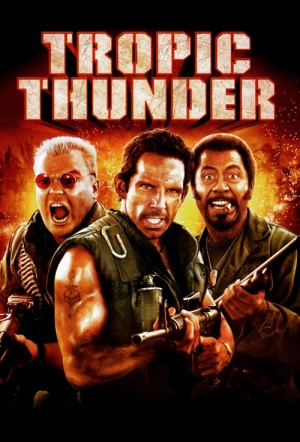 Comedy about a group of pompous actors making the most expensive Vietnam war movie ever made. The 'cast' includes an action star (Ben Stiller), a comedian (Jack Black), an Australian Oscar-winner (Robert Downey Jr.) and a rapper-turned-actor (Brandon T. Jackson). Fed up with his self-involved cast, the film's director (Steve Coogan) drops them into the jungle to take care of themselves, where they get caught up in a conflict they don't realise is real. The cast also includes Nick Nolte and cameos from Tom Cruise and Tobey Maguire.

Downey Jr's character is an Oscar-winner who takes on a role originally written for a black actor. Rather than re-write the part, he dyes his skin black. Downey Jr says, "If it's done right, it could be the type of role you called Peter Sellers to do 35 years ago. If you don't do it right, we're going to hell."

This film is Stiller's first as director since Zoolander, and could upset a lot of sensitive people (Stiller's character adopts an Asian baby but worries "that all the good ones have gone"). Apparently he got the idea over twenty years ago while shooting Empire of the Sun.

From the genius fake trailers at the start to Tom Cruise's end titles dance routine (no, really), Tropic Thunder is one hell of a night at the movies.

A flashy, nasty, on-and-off funny and assaultive sendup of the film industry.

When it's all over, you'll probably have the fondest memories of Robert Downey Jr.'s work. It's been a good year for him, this one coming after "Iron Man." He's back, big time.

Tropic Thunder is a relatively smart and refreshingly politically incorrect satire, and there is a lot to like as it takes the mickey out of Hollywood's twisted priorities, fart jokes, action films, dummed-down scripts and unrealistic plot lines, overly pampered actors and money-hungry studios. Of course, it falls victim to most of this itself, but at least you'll get a laugh out of it.

Stiller manages his movie nicely so that all actors get their share of the comic spotlight. Seldom does an ensemble comedy not contain a single weak character or performance as does this one.

To top everything off, Tom Cruise may just have resurrected his career with the role of Les Grossman.

It's been done before, but it hasn't been done this well for years. Tropic Thunder might just be the last behind-the-scenes-on-a-movie movie that anyone needs to make for a long time to come.

Gleefully un-PC, Tropic provides some of the most fun you'll have at the cinema this year.