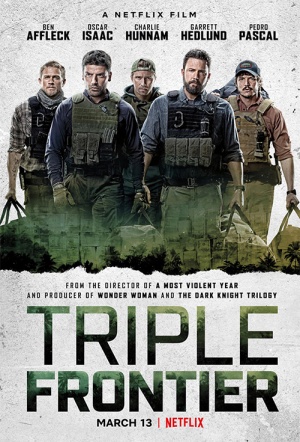 A group of ex-Special Forces operatives meets up for a perilous off-the-clock job in this action flick featuring Ben Affleck and Oscar Isaac and from the director of Margin Call.

Five friends, all veterans, reunite to rob a Latin American drug lord. But loyalties are tested when things take an unexpected turn and the operation begins to spiral out of control.

Director J.C Chandor's heavy-duty heist movie reunites a bunch of former Special Forces operatives who conspire to rip off a South American drug lord. Pecuniary anxiety and ill feeling towards their post-military lives – one is flogging condos, for instance, another is giving pep talks for the army, and all are disillusioned – comprises the rationale for bursting all guns blazing into the criminal domain.

Every now and then a B-grade film with a lot of A-list talent sneaks up on us by skipping the pompous casting announcements, overhyped trailer reveals and other silly fanfare studios often drown us in. The Oscar Isaac and Ben Affleck (OK, and Charlie Hunnam, Pedro Pascal and Garrett Hedlund)-starring Triple Frontier is such a movie. Often, these stealth attack films are kept hidden because they're shit, but fortunately, this one is a bloody good time.

We've seen these sorts of situations once too often, done tighter and better, with more surprise.

It's an enjoyable enough way to spend two hours but without any commentary or real depth, it's in need of a bit more suspense or conflict to really oil the wheels, the film too often ambling along when it should be racing.

This Netflix action blowout gets a pass on mindless escapism, but its attempt to sell itself as something deeper is beyond redemption.

"Triple Frontier" is a solid, engrossing genre item with designs on being something more. It doesn't quite get there but it does well enough along the way to make the journey worth taking.

Despite the heavy dose of action and numerous tense situations, this Netflix offering has trouble staying in high gear once it gets there and the characterisations remain one dimensional - the men all speak exactly the same way.

Triple Frontier is engaging in parts with well-mounted action. But the characters lack definition and you can't help but think an old timer like Howard Hawks or Sam Fuller might have done it better in half the time.

It's not a perfect movie by a long shot, but it's certainly one that has more to say than ka-boom.

Triple Frontier has the good sense to take a macho, "Expendables"-like set-up and turn it inward. It just doesn't go far enough.