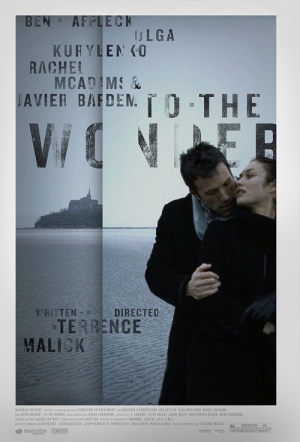 Lyrical romance from writer/director Terrence Malick (Tree of Life, Badlands) starring Rachel McAdams, Ben Affleck, Olga Kurylenko and Javier Bardem. Billed as an "exploration of love in its many forms".

Tells the story of Marina (Kurylenko) and Neil (Affleck), who meet in France and move to Oklahoma to start a life together. While Marina makes the acquaintance of a priest and fellow exile (Bardem), who is struggling with his vocation, Neil renews a relationship with a childhood sweetheart, Jane (McAdams).

The film premiered at the Venice Film Festival where it was met with both boos and cheers, or as Variety put it: "Malick continues to take bold risks, courting ridicule and rapture in equal measure". To the Wonder is part of  Malick's creative acceleration - having famously taken nearly 40 years to produce five films, the filmmaker is set to release four in 2013/2014.

To the Wonder / Reviews

Flaws and all, this is ravishing, distrib-worthy work from a filmmaker who hasn't lost his capacity to move and surprise.

A brave, soul-stirring and sensitive work.

Arty for sure, but for the first time, its maker is working with anxieties we all feel. Let's hope this Malick sticks around for a while.

Malick's insistence on finding a cinematic idiom that connects beauty to ultimate truth is noble and sincere. But the fine intentions pave a road to puzzlement, not awe.

Many will be dissatisfied by a film that would rather evoke than supply. I understand that, and I think Terrence Malick does, too. But here he has attempted to reach more deeply than that: to reach beneath the surface, and find the soul in need.

Comes off, especially in the laborious second hour, as visual doodling without focused thematic goals.

100 per cent pure, unadulterated Malick, an absorbing, thoughtful, moving meditation on the things that matter.