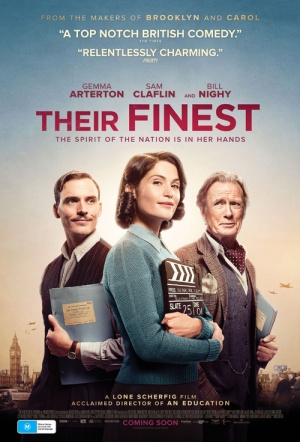 A British film crew attempts to boost morale during WWII by making a propaganda film after the Blitzkrieg. Stars Gemma Arterton and Bill Nighy. Based on the novel Their Finest Hour and a Half by Lissa Evans.

"Catrin Cole (Arterton) is a "slop" scriptwriter, charged with bringing a female perspective to war films produced by the British Ministry of Information's Film Division. Her current project is a feature inspired by stories of British civilians rescuing soldiers after the retreat at Dunkirk. Catrin's artist husband looks down on her job, despite the fact that it's paying the rent. At least lead scenarist Tom Buckley (Sam Claflin) appreciates her efforts While on location in Devon, Catrin begins to come into her own and earn the respect of her peers. She's the only crewperson that Ambrose Hilliard (Nighy), a past-his-prime yet nonetheless pompous actor, will talk to." (Toronto International Film Festival)

If La La Land is America’s sparkly love letter to the golden age of 1950s Hollywood, then Their Finest is Britain’s stiff-upper-lip pat on the back to those who kept calm and carried on making art in the dull fog of WWII. Gemma Arterton plays the everyday heroine Catrin Cole, hired by the Ministry of Information to “write the slop” (women’s dialogue, lol) for their latest epic propaganda film tasked with inspiring the nation.

A relentlessly charming romantic comedy that sees director Lone Scherfig ... finally expand the sensibilities she displayed with "Italian for Beginners" and "An Education" into a more commercial direction.

Love and laughter flow so naturally in "Their Finest" that it is almost (almost) easy to forget there's a war on.

Chiappe's screenplay, based on Lissa Evans' novel Their Finest Hour and a Half, unfortunately suggests that even someone as spirited as Cole can only find true worth in the reciprocated love of a man, and not her work.

A prime example of the Brits doing humour as they do it best.

Doesn't quite keep calm but it carries on ably through a celebration of classic cinema.

A very watchable British story at that.

Genial and engaging with a fine sense of humour, it makes blending the comic with the serious look simpler than it actually is.

Arterton brings grace and understatement to Catrin's gradual belief in herself and in the magic of movies, while Claflin reveals maturity and dry humour that will be a surprise for audiences who know him primarily from his Hunger Games role.

Almost explicitly tailor-made for mums and grans – painfully so, in fact.

Inspiring, funny and genuinely romantic, Their Finest is a solid, refreshing crowd-pleaser.