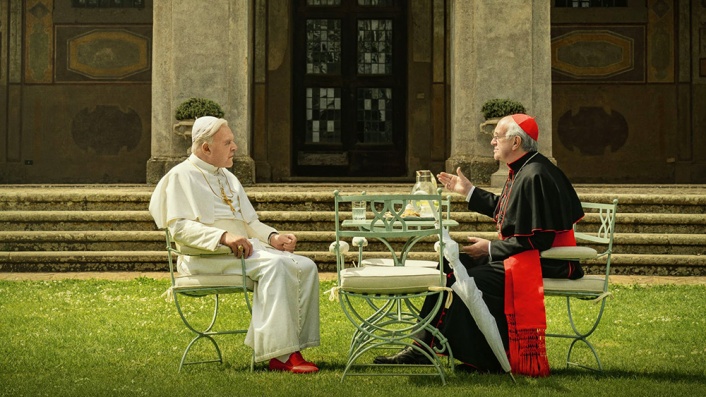 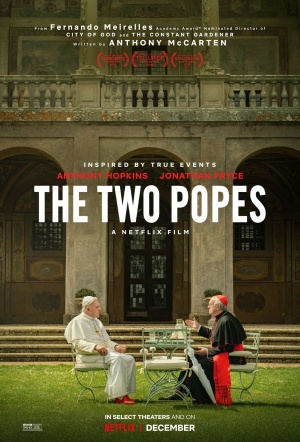 Netflix drama that goes behind the Vatican walls as Pope Benedict (Anthony Hopkins) and the reformist Pope Francis (Jonathan Pryce) attempt to forge a new path for the Catholic Church. Inspired by true events.

The story of one of the most dramatic transitions of power in the last 2,000 years. Frustrated with the direction of the church, Cardinal Bergoglio (Pryce) requests permission to retire in 2012 from Pope Benedict. Instead, facing scandal and self-doubt, the introspective Pope Benedict summons his harshest critic and future successor to Rome to reveal a secret that would shake the foundations of the Catholic Church.

Raising issues, but never confronting them, this is a beautifully shot, but nonetheless deeply theatrical and sentimental tale. In sidestepping controversy, it trips over its own moral shoelaces with, for example, flashbacks to Bergoglio’s youth in Argentina, but none to Ratzinger’s stint in Austria’s Hitler Youth. And, whilst child abuse in the Catholic Church is mentioned, it’s rapidly jettisoned in favour of undeniably entertaining banter and intellectual dueling.

But well before its end, the film has settled into the groove of a corny buddy comedy so unreal that little trace remains of the serious issues at stake.

The Two Popes is an exuberant Vatican-set buddy movie that attempts to lift the lid on the inner workings of the Holy See.

The delicate dance between the two veteran actors, both eagerly devouring a late-life jewel of a script, is a joy to behold.

There's an unquestionable appeal to the way the movie transforms a weighty and divisive topic into more approachable terms.

As an extraordinary piece of writing - and an even more impressive showcase for its actors - it eloquently communicates the importance of giving people something to believe in.

Anchored by two outstanding performances from Anthony Hopkins and Jonathan Pryce, the film is a triumph of writing as well as unostentatious filmmaking.