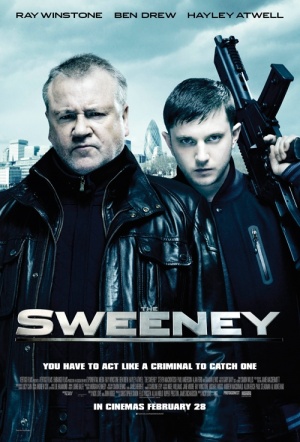 In this crime drama based on the 1970s TV series, Ray Winstone (Sexy Beast), Damien Lewis (TV's Homeland) and Ben Drew (Brit rapper 'Plan B') star as part of an elite police unit. Winstone is Regan - a hard-assed Flying Squad detective with an unconventional approach to coppering, on a personal mission to take an old nemesis off the streets. But with bureaucracy and downsizing getting in the way of his particular brand of law enforcement, will Regan get his man before the changing police force gets him?

A play on Sweeney Todd, the title derives from the cockney rhyming-slang nickname for the Flying Squad, a branch of London’s Metropolitan Police first set up in the 1920s to tackle armed robbery and violent crime.

2012Rating: MA15+, for violence and language throughout and some sexual content111 minsUK
ActionDrama

Much of the action is routine, although the central setpiece, chasing masked criminals through London's Trafalgar Square and National Gallery, is a praiseworthy highlight.

There's not much more we could ask for in a contempo police procedural - except maybe subtitles to overcome the heavy, dense cockney accents.

It's Winstone who keeps 'The Sweeney' on the right side of duff.

Ray Winstone is well cast, but that's about the only thing this remake gets right.

The action's arresting but the dialogue's not much cop in this well-played and enjoyable hardboiled British police thriller.