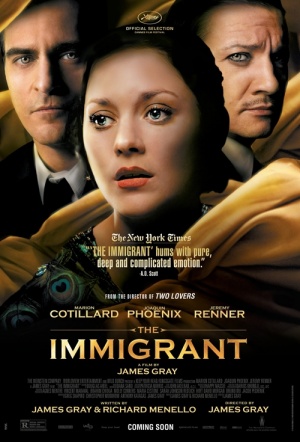 Joaquin Phoenix and Marion Cotillard lead this portrait of prohibition-era Manhattan. Based on the stories and experiences told to director James Gray (We Own the Night) by his grandparents, this Palme d'Or-nominated tragedy follows a Polish immigrant who falls prey to a charming but wicked businessman who leads her into prostitution.

"Young Polish immigrant Ewa (Cotillard), after being separated from her sister at Ellis Island, finds herself caught in a dangerous battle of wills with a shady burlesque manager (Phoenix)... [director] Gray imagines 1920s Manhattan as a dusty, sepia-toned dreamworld, sometimes faintly luminous but often dejectedly burnt-out. The same could be said of the film's heroes: after a charismatic magician (Jeremy Renner) starts to compete for Ewa's affections, The Immigrant builds steadily to its devastating climax. The film is also a morally ambiguous, open-ended reflection on family loyalty, urban disillusionment, and the unpredictable twists and turns of human motivation." (New York Film Festival)

This is the third collaboration between Gray and Phoenix, after crime saga We Own the Night (2007) and romance Two Lovers (2008). Both are also set in New York.

The shock of the old made new, a miracle achieved, a great movie rising before me-like a delusion, like a dream.

Earnestly and unabashedly melodramatic to an extent that may baffle audiences accustomed to clever, knowing historical fictions. But it also has a depth and purity of feeling...

It's a mystery why this isn't a great movie.

Quietly wrenching... sensitively observed melodrama. A splendidly atmospheric recreation of the Lower East Side, the intimately focused work is anchored by another superior performance Cotillard.