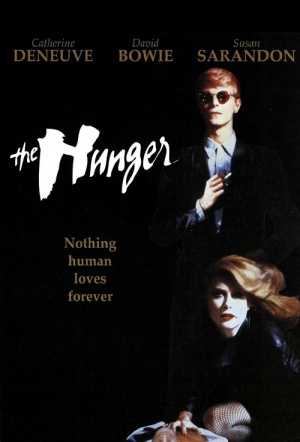 Tony Scott directs this horror tale starring Catherine Deneuve as Miriam, a centuries-old vampire capable of bestowing the gift of immortality on her lovers – namely her current partner John (David Bowie). To sustain the pair's sanguinary requirements, they cruise New York nightclubs in search of victims.

When John awakens one morning to discover telltale signs of aging it is revealed that his own sustained youth is not permanent, and in a panic he visits the clinic of scientist Sarah Roberts (Susan Sarandon) who is researching techniques to reverse the aging process. Roberts initially dismisses him as a crank, leaving him to sit in the lobby for several hours, during which time his body ages several decades.

Sarah traces John to his uptown flat where she runs into Miriam - who soon seduces Sarah in a steamy lesbian tryst. But sex isn't the main motivator for a vampire, and Miriam proves to have stronger appetites...