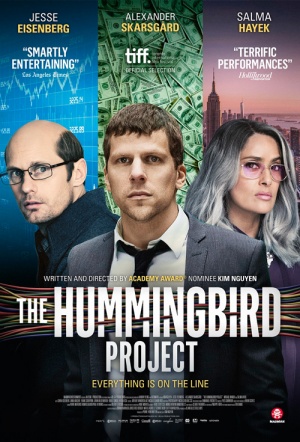 Two traders (Jesse Eisenberg and Alexander Skarsgård) compete with their old boss (Salma Hayek) to land a massive deal in this drama thriller.

"Determined to create a more efficient way of transmitting information between stock exchanges, the cousins [Eisenberg and Skarsgård] scheme to lay fibre-optic cable from Kansas City to New York, gaining them and their clients crucial seconds in order to trounce their competitors. Vincent (Eisenberg) — the force behind the scheme — is a frantic dreamer who pursues his ideas with zealot-like intensity while promising everyone the moon. Anton (Skarsgård) is the brains, a socially awkward data wiz with few friends besides Vincent. Both end up in the crosshairs of their ruthless former employer Eva Torres, a Wall Street lion willing to devour anyone unlucky enough to get in her way. Unfortunately, Anton hasn't entirely figured out how to make the cable connection fast enough to warrant the expense. As time runs out, Vincent's claims of grandeur get progressively wilder." (Toronto International Film Festival)

The Hummingbird Project has all the makings of a wicked moral thriller. Its probe into sticky ethical quandaries inherent in the unchecked tech-driven colossus that is the modern era is, undoubtedly, sharply topical stuff. But writer/director Kim Nguyen, a competent hand but lacking the superior formalist chops of a David Fincher to elevate and galvanise the material, only gets there in scattered fashion.

An entertaining vehicle for vivid performances by both actors.

It's an odd tale, but in its sneaky way, an unexpectedly engaging one.

Although it perhaps eventually over-eggs the contrivances and misfortunes, there's a lot to like about this understated Project.

A defiantly odd thriller involving esoteric subject matter, The Hummingbird Project tells a familiar story of ambition and greed with enough eccentricity that the movie's strangeness becomes one of its chief attributes.

Whatever it takes to keep a techno hellraiser on its feet, this humdrum Hummingbird doesn't have it, despite the efforts of Eisenberg and Skarsgård to breathe some life into it.

Fascinating story but its telling leaves you cold.

There's a good reason why no one's ever made a movie about this before - in fact, there are probably a few.

Though this intriguing genre-hybrid might be just a little too odd for more mainstream success, this is a promising step in the right direction for Nguyen.