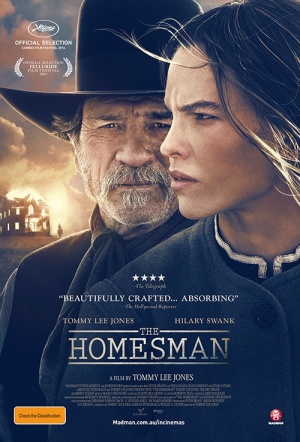 "Mary Bee Cuddy (Swank), lives a solitary existence in a God-fearing mid-western town. She is designated by members of her church to take back East three women who have lost their minds. On the way from Nebraska to Iowa, where those women will at last find refuge, Mary Bee saves the life of Briggs (Lee Jones), a claim-jumper and outlaw. He agrees to help in her mission through snowstorms and perilous encounters with settlers, Indians and the harshness of the Frontier territory." (Cannes Film Festival)

Unlike other actor-directors, Jones never seems to indulge excess on the part of his cast. Though the characters are strong, the performances are understated.

On form as both director and actor, Jones crafts a mournful but moving hymn to the western. The feminist subtext, meanwhile, brings a fresh slant to the old genre.

It doesn't help that Swank never finds a way into this highly unappealing character, or that Jones (mostly phoning in the pitiable surliness) avoids delving very deeply into the story's proto-feminist undercurrents.

The mood flits between solemn and rascally, and the pacing is measured: this is storytelling at a mosey rather than a trot.

There are some broad emotional flourishes and ripe performances - maybe bordering on the over-ripe. But it is put over with such richness and verve.

It’s a decidedly bumpy ride to an odd destination.

Another solid directorial effort from the occasional filmmaker.