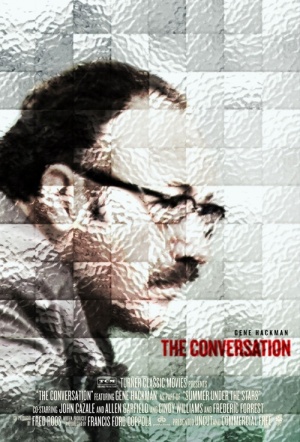 Francis Ford Coppola's classic, paranoid suspense film - winner of the 1974 Palme d'Or. Gene Hackman plays Harry Caul, a professional surveillance man engaged by the shadowy chief of an unnamed corporation to listen in on the conversation between a man and woman. Caul obsseses over the tapes and becomes convinced the couple's lives are in danger, even as he slides into paranoia.

Winner of the Palme d'Or and Prze of the Ecumenical Jury (Special Mention) at Cannes 1974. Best Editing and Soundtrack at the 1975 BAFTA Awards.
1974Rating: M, Low level violence113 minsUSA
DramaThrillerClassic

A major artistic asset to the film -- besides script, direction and the top performances -- is supervising editor Walter Murch's sound collage and re-recording.

A bleak and devastatingly brilliant film.

A severe and gripping masterpiece.

A fantastic reminder of why 70s Hollywood is so often the benchmark for modern moviedom to aspire to.