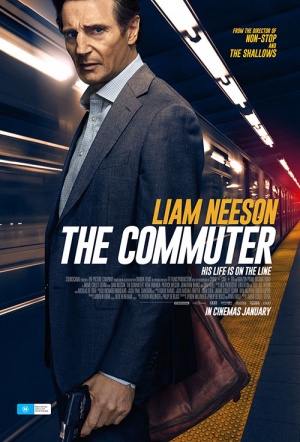 Liam Neeson stars as insurance salesman, Michael, on his daily commute home which quickly becomes anything but routine. After being contacted by a mysterious stranger, Michael is forced to uncover the identity of a hidden passenger on the train before the last stop. As he works against the clock to solve the puzzle, he realises a deadly plan is unfolding and is unwittingly caught up in a criminal conspiracy. One that carries life and death stakes, for himself and his fellow passengers.

Jaume Collet-Serra has a flair for the absurd. His films hit that sweet spot where art meets trash, going right up to the line of implausibility then cheerfully sailing over it. They’re wildly entertaining, and Collet-Serra is no hack - his films are well made, he just has no interest in restraint or realism.

Collet-Serra cranks up this locomotive as he knows best, building as much breathless, senseless real-time momentum as possible before train and plot go simultaneously, albeit spectacularly, off the rails.

It's not even very good as a genre exercise, and can't always keep track of which genre muscles it wants to flex.

You know where it’s going and it gets you there perfectly well, but in a few years’ time you’d be hard pressed to distinguish it from dozens of similar journeys.

The frequent collaborators hurtle through the expected with an unshakable been-there, done-that air. They're competent and confident, but they're simply, uninspiringly retracing their usual route.

It's Neeson Time, and it's not in the man to let us down.

Thoroughly enjoyable to watch if totally forgettable once you leave the theatre, The Commuter feels like one of those films they simply don't make anymore, at least in Hollywood.

Taut, inventive, and never in danger of overplaying its hand, The Commuter is a robust and rather old-fashioned thriller...