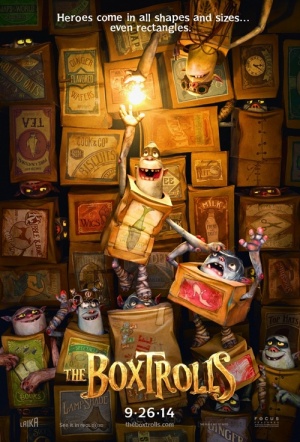 Stop-motion animated family adventure from Laika Entertainment (Paranorman, Coraline) about Eggs, a young orphan boy raised under the streets by a group of cave-dwelling, trash-collecting creatures known as the Boxtrolls. The Boxtrolls are targeted by an evil exterminator named Archibald Snatcher (Ben Kingsley), but he'll have to get past Eggs first. Based on the children’s novel Here Be Monsters and featuring the voices of Elle Fanning, Simon Pegg, Nick Frost, Toni Collette and Richard Ayoade.

Elegantly presenting issues surrounding social stature, materialism, and how they warp our sense of identity, The Boxtrolls engrosses with a child-friendly moodiness reminiscent of Henry Selick’s mid-‘90s family features James and the Giant Peach and The Nightmare Before Christmas. Like Selick’s films, the true charm of these characters comes from their exuberantly animated personalities – not a prettied-up Disney-fied exterior.

Set it against the shiny blandishments that have passed for family fun this season, and it starts to look vaguely radical.

There’s slapstick and silliness to entertain small children and nefarious plots for the adult audience to untangle...