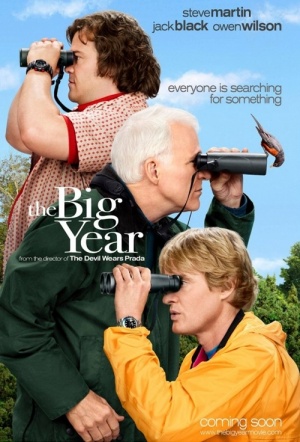 Comedy heavyweights Steve Martin, Jack Black and Owen Wilson team up in this film about the cut-throat world of competitive birdwatching. From the director of The Devil Wears Prada.

As far as birdwatchers are concerned 'The Big Year' competition is the Holy Grail of the hobby. Competitors take a year out of their regular lives to travel the world and photograph as many different species as they can. The competition is ruthless and defending champ Kenny (Wilson) engages in any and every form of sabotage he can in order to keep his title. Stu (Martin) and Brad (Black), two men at very different stages of their lives, become unlikely allies as they try to keep up with Kenny and reach for the crown themselves.

Based on the book The Big Year: A Tale of Man, Nature and Fowl Obsession by Mark Obmascik.