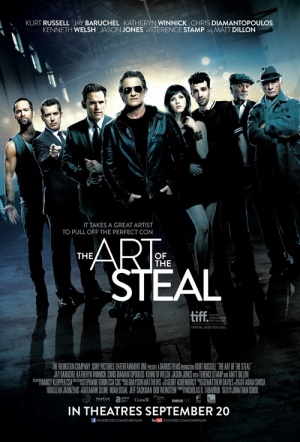 Heist comedy caper starring Kurt Russell as a failed daredevil, leading a gang of thieves (including Matt Dillon, Terence Stamp and Jay Baruchel) as they attempt to steal a multi-million-dollar antique book.

"Russell plays Crunch Calhoun, a motorcycle daredevil vaunted less for his death-defying leaps than his calamitous crash landings. Crunch also fancies himself something of a master thief, but winds up in prison when he's double-crossed by Nicky (Dillon), his brother and partner in crime. Released after serving his sentence, the cash-strapped former stuntman is inevitably tempted to complete one last score, and reluctantly reunites with his scheming sibling. With a painstaking plan in place and the old crew reassembled, the million-dollar question becomes: can the Calhoun brothers pull off the job before their tenuous truce unravels?" (Toronto Film Festival)

In the end, alas, it's the viewer who will leave feeling conned.

Made up of plundered parts from the Oceans series and The Usual Suspects, and-like several of the forged tomes that figure in the plot-it's a pale imitation.

Fairly amusing heist film with some sibling tension helping the story along.

It's fairly transparent to anyone who's seen more than a couple of con-man pictures. Indeed, the plot is so perfunctory and shrug-worthy that it seems to function primarily as an excuse to let the cast riff.

Satisfies both our vicarious greed and the desire some viewers will have to see a priceless work of art wind up in the hands of someone who couldn't care less about its price.