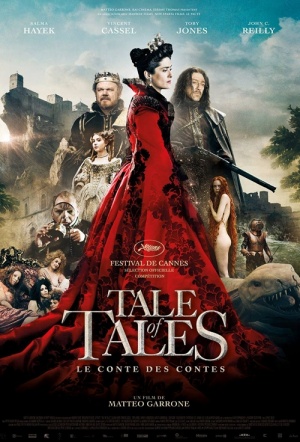 Fantasy horror film adapting three tales by Neapolitan poet and courtier Giambattista Basile, written in the 1600s and influencing the likes of the Grimm Brothers and Hans Christian Andersen.

"Once upon a time there were three neighboring kingdoms each with a magnificent castle, from which ruled kings and queens, princes and princesses. One king was a fornicating libertine, another captivated by a strange animal, while one of the queens was obsessed by her wish for a child. Sorcerers and fairies, fearsome monsters, ogres and old washerwomen, acrobats and courtesans are the protagonists of this loose interpretation of the celebrated tales of Giambattista Basile." (Cannes Film Festival)

Taken together, the parables serve primarily to entertain - an effect that has as much to do with Garrone's command of the cinematic language as it does the content itself.

The sheer, obstinate oddness sends crowd-pleasers like 'Game of Thrones' and 'The Hobbit' scuttling into the shadows.

The prime joy of this movie is its episodic dedication to surprise, where it develops its own inimitable internal logic within the first few scenes, yet keeps on raising the wacky bar as the runtime canters on.

Combines the wildly imaginative world of kings, queens and ogres with the kind of lush production values Italian cinema was once famous for.