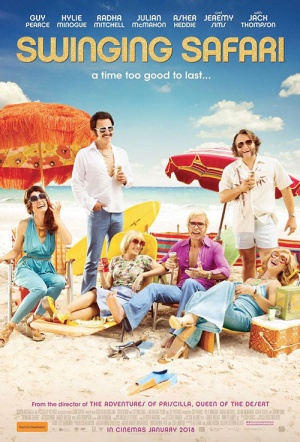 Guy Pearce and Kylie Minogue lead this comedy set in mid-'70s Australia about a beached whale, the kids who can't get enough of it, and their sexually promiscuous parents. From the writer-director of The Adventures of Priscilla, Queen of the Desert.

A 200-ton blue whale gets washed up on a local beach and the kids think it’s the biggest thing that’s ever happened in Australia. Behind closed doors, the Mums and Dads of a quiet suburban cul-de-sac are going to celebrate in their own special way, by joining the sexual revolution and throwing a wife-swapping key party. And like the rotting whale, it’s all about to go spectacularly wrong.

In the opening scene of director Stephan Elliott’s madcap comedy Swinging Safari there’s a smorgasbord of Australian 70s beach iconography. Poorly assembled beach umbrellas partially shade bodies coated with liberal application of tanning oil, rather than sunscreen (Skin Cancer hadn’t been invented yet, you see). The menu consists of buckets of KFC and enough cask wine to give any sommelier nightmares.

As he did so winningly in "Priscilla" and 1997's unfairly overlooked outback comedy "Welcome to Woop Woop," Elliott celebrates Australian identity with genuine love while simultaneously roasting it over the coals of no-holds-barred satire and parody.

A rowdy, crude and playful parody that takes an affectionate look at life in 70s Australia.

Is this outrageous comedy sexy or revolting? Elliott proves - though this feels like the least of his achievements - that a film can be both.

An energetic, irreverent, autobiographically inspired affair filled with key swapping, children running amok and a rotting 200-tonne whale, the film proves a mixed bag but, given the era on display, its messiness always feels appropriate.

It's just such a shame Swinging Safari is so shambolic and nowhere near as funny as it thinks it is.

A fun enough time, to be sure, but jokes about knitwear, bad haircuts and fondue parties only get you so far.

Swinging Safari is so crammed with in-jokes and memorabilia, the quieter moments are almost drowned out... But the film still offers movie goers a distinctive, exuberant, quintessentially Australian experience.