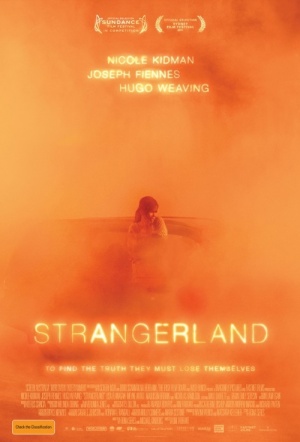 Nicole Kidman and Joseph Fiennes star in this psychological drama-thriller as parents, new to the remote Australian desert town of Nathgari, thrown into crisis when their two teenage kids mysteriously disappear just before a massive dust storm hits the town. Feature debut from director Kim Farrant.

"With Nathgari now eerily smothered in red dust and darkness, the locals join the search led by local cop David Rae (Hugo Weaving). With temperatures rising, and the chances of survival plummeting with each passing day, Catherine (Kidman) and Matthew (Fiennes) find themselves pushed to the brink as they struggle to survive the uncertainty of their children's fate." (Sundance Film Festival)

Perplexing Aussie thriller... leaves its audience as in the dark as its protagonists

Sits rather awkwardly, and frustratingly, between here and there, sure of what it doesn't want to do and say, but not quite settled on what it does.

The film remains stranded in a sort of genre no man's land.

Bold, extremely accomplished and confident ... it's got a foot in each of the commercial and arthouse camps, and is entertaining in both ... gripping, thrilling, creepy and exciting.