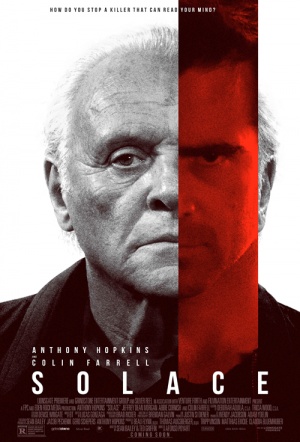 Supernatural, police thriller starring Colin Farrell, Abbie Cornish and Anthony Hopkins. An FBI agent and a retired analyst team up to take on a serial killer.

Solace has been in the works for nearly 15 years. Says the Hollywood Reporter: "Afonso Poyart’s Solace finally sees the light of day after a long gestation and difficult birth, followed by more than a year spent locked away in a cupboard. Many hands were set to work on the screenplay which at one point – word had it – was being tailored to become a sequel to David Fincher’s Se7en."

...[a] ludicrous murder mystery, which is stuck somewhere between a bad season of Dexter and a dated crime flick.

A lot of the blame for this misfire must fall on novice Brazilian director Afonso Poyart, whose crackpot editing and fondness for irrelevant zooming don't so much turn this film's screws as loosen them unrecoverably.

Staggeringly silly and visually disordered, this unfortunate misfire has been kicking around Europe and elsewhere for a couple of years under different titles, and it's easy to see why.

As leftovers go, "Solace" retains a fair amount of flavour, thanks to high-end ingredients.

The good news is that the movie is half decent. The caveat is that it could have been a lot better.