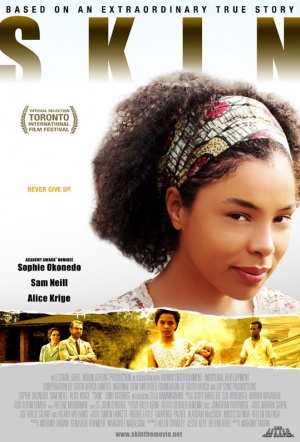 A South African apartheid true-story drama about Sandra Laing, an African child born in the 1950s to Afrikaners, unaware of their black ancestry. Her parents (Sam Neill and Alice Krige) are rural shopkeepers who lovingly bring her up as their ‘white’daughter.

Sandra is sent to a boarding school in the neighbouring town of Piet Retief, where her (white) brother Leon is also studying, but parents and teachers complain that she doesn’t belong. She is examined by State officials, reclassified as ‘coloured’, and expelled from the school. Her parents fight through the courts to have the classification reversed and the story becomes an international scandal. Thus begins Sandra's thirty-year journey from rejection to acceptance.

As an adult, Sandra is played by Sophie Okenedo (Hotel Rwanda).

One of the more bizarre illustrations of racial injustice under apartheid is dramatized in Skin.

Alas, Mr. Fabian, directing his first feature-length fiction film, uses a club whenever a feather would do. He also mishandles the actors, in particular Mr. Neill and Ms. Okonedo, both of whom have been incomparably better elsewhere.

This great film by Anthony Fabian tells this story through the eyes of a happy girl who grows into an outsider.

Sam Neill is back on the big screen, sporting facial hair and a South African accent, in a new film called Skin.

Too many of the characters are either good or bad, and that loss of nuance is missed.

The fact that it's actually based on a true story adds an extra layer of poignancy, heightened further by another superb Sophie Okonedo performance.

Extreme conditions breed exceptional stories. Just as countless dramas sprang out of Nazi Germany, there are a plethora of tales to come out of apartheid-era South Africa.