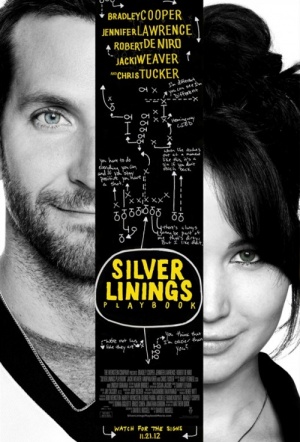 Romantic comedy from director David O. Russell (The Fighter) starring Bradley Cooper as a heartbroken man fresh out of a mental institution, living with his parents and trying to get his life back together. Co-stars Jennifer Lawrence (who nabbed an Oscar for her role), Robert DeNiro and Chris Tucker. Adapted from Matthew Quick’s bestselling novel.

Pat (Cooper) has lost everything - his house, his job, his wife (to another man) and his compsure. After months in a state institution, he now finds himself living back with his mother (Jacki Weaver) and father (DeNiro). Determined to remain positive (the Silver Lining ethos), Pat devotes himself entirely to becoming the man his wife wanted him to be. But his regime gets sidetracked after meeting Tiffany (Lawrence), a girl with problems of her own. Tiffany offers to help Pat reconnect with his wife, but only if he'll do something very important for her in return.

In a script that never lapses into mundane or uninteresting language, the scenes between Pat and Tiffany are sculpted with an almost David Mamet-like sharpness.

Exuberant... does almost everything right.

This is a date movie that doesn't offer the sophistication it thinks it does, but is as enjoyable and good-natured as the genre requires.

So good, it could almost be a terrific old classic.

It's clever and cute and never lets you forget it.

It wraps up a little more cosily than the director’s hardcore fans might have liked but, for just over an hour, this is one of the strangest American comedies to emerge in quite some time.

Jennifer Lawrence is the standout in a tonally uneven, eccentric romantic dramedy.

It's the perfect material for Russell, who not only deals perceptively with the dizzying swings of manic depression, but makes it the fabric of a big, generous, happy-making ensemble comedy.