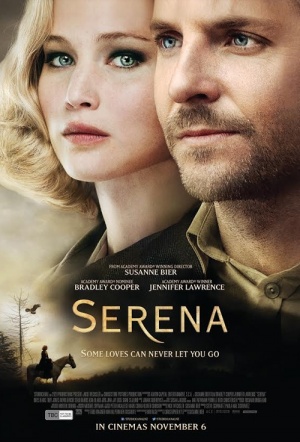 Jennifer Lawrence and Bradley Cooper (after also starring together in Silver Linings Playbook) are Serena and George Pemberton, a married couple in 1920s North Carolina, who ruthlessly attempt to build a timber empire. Based on the 2008 novel by Ron Rash, directed by multi award-winning Danish filmmaker Susanne Bier (In a Better World).

The burgeoning entrepreneurs vanquish all who stand in the way of their ambitions. When Serena learns that she can never bear a child, she sets out to murder the woman who bore George a son before his marriage. And when she starts to suspect that George is protecting his illegitimate family, the Pembertons' intense, passionate marriage begins to unravel.

After Silver Linings Playbook and American Hustle, how could reteaming Jennifer Lawrence and Bradley Cooper go wrong? In a word – Serena. So much of a stinker it veers on parody (a la The Spoils of Babylon), this 1920s-set tale sees A-list stars brought to bear on a one hell of a turkey, a costume drama that fails to find its footing as either a detailed period piece or fantastical romance. Instead, it’s closer to tacky mini-series in tone than Hollywood elegance, even if the production values struggle vainly to suggest otherwise.

Both problematic and fascinating, an unsympathetic spiral of human tragedy that plays a little like a hand-me-down folk ballad put to film.

Handsome production values notwithstanding, Bier's drama is all bark and largely trite.

We don’t invest anything in either character, and with barely any tension, Serena grabs neither head nor heart.

The film crumples with a shower of sparks into a forest fire of melodramatic absurdity, with all kinds of violent lurches and plot entanglements. But not before Lawrence has given us a performance of fierce, bladed intensity.

It is difficult to believe a single word of it, still less to care about these relentlessly selfish and short-sighted characters.

Commercially it looks a disaster. Artistically, if very far from a triumph, it’s interesting, almost held together by its charismatic stars.