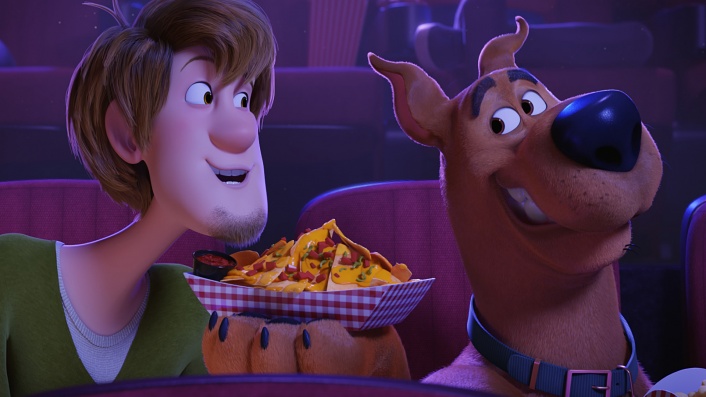 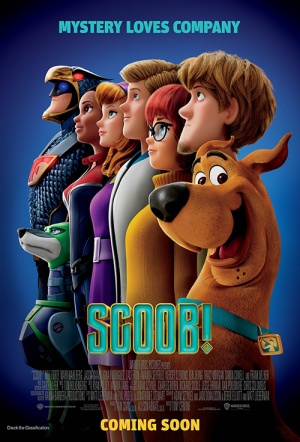 Scooby-Doo animated origin story starring the voice talent of Will Forte as Shaggy, Amanda Seyfried as Daphne, Gina Rodriguez as Velma, and Zac Efron as Fred. This film leads into a Hanna-Barbera cinematic universe which will reportedly include Jetsons, Flintstones and Wacky Races movies.

Scoob! takes us back to Scooby and Shaggy's first encounter and reveals how they came to join up with detectives, Fred, Velma and Daphne to found Mystery Inc. Hundreds of cases later, they're faced with their most difficult task to date: foiling a plot to unleash a ghost dog named Cerberus upon the world. And while doing so, they discover that Scooby has a mysterious legacy and destiny that none of them had ever imagined.

The best part of Scoob!, a computer-animated reboot of the Scooby-Doo franchise, is the part in which the movie painstakingly recreates the opening credits of the original series.

With Scoob!, Warners has begun tethering together all those junky old mystery-caper cartoons—which enjoyed their heyday in the aesthetically ravaged 1970s—to create a new and formidable franchise, replete with mineable I.P. and appealing to . . . well, therein lies the problem.

These are trying times, and parents may be grateful to have a virtual babysitter to distract their kids for 90 minutes, in which case, “Scoob!” is surely more effective than sitting them in front of the fish tank.

A messy and mystery-free relaunch of the classic animation tries, and fails, to update the formula, adding a charmless superhero spin.

Look, no one is expecting Citizen Scoob here. This is not cinema, it’s a $19.99 48-hour distraction.

The occasionally clever dialogue and the peppy voice performances are the best things about “Scoob!,” but not nearly enough to overcome the loud and convoluted overall tone.

As corporate directives go, Scoob! has a lighter spirit (until the obligatory protracted action climax) and swifter throwaway gags than either of the live-action “Scooby-Doo” remakes offered. (Thank God for Matthew Lillard and Linda Cardellini, though. I start each day with that prayer.) The animated “Scoob!” aims younger, and mostly is better for it.

Yes, it’s all a bit silly and oddly plot-heavy — including a very generous dose of classic mythology — but it feels like a classic Scooby-Doo mystery, and it’s clear that everyone involved with the project has nothing but love for the universe they’re trying to retrofit for the modern age.

A perfectly fine distraction for kids and parents stuck at home, with enough cute and amusing elements throughout to keep viewers engaged.