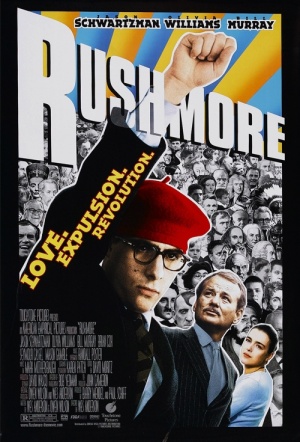 Wes Anderson's cult hit comedy - his second film after 1996’s Bottle Rocket. Eccentric, 15-year-old Max Fischer (Jason Schwartzman) is the king of Rushmore prep school's extra-curricular activities – holding positions from president of the bee-keepers society to manager of the lacrosse team. But when he befriends rich industrialist Herman (Murray), they both fall for teacher Rosemary (Olivia Williams). As the love triangle heats up, Max's big dreams start to crumble around him.

A wickedly funny high school comedy for most of its running time, Rushmore is a bracingly fresh and original outing.

A peculiar, poignant comedy, with an outstanding character turn from Murray.

Offers more than simply a series of high-grade yuks; it's a finely-judged parable on the line between self-delusion and reality.

Offbeat and off centre highschool movie with ascerbic one liners delivered by a superb cast. A real treat.