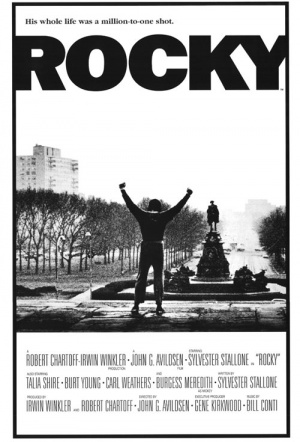 Working class Philadelphian Balboa (Stallone) has struggled to ascend past his 'nobody' status as a boxer. When heavyweight champion Apollo Creed (Carl Weathers) visits his local town, a money-spinning exhibition match is set up: the world champ will give an unknown the chance for a title. Loving his nickname 'The Italian Stallion', Balboa is selected. With his ex-trainer Mickey (Burgess Meredith) and girlfriend Adrian (Talia Shire) by his side, Balboa takes on the tremendous odds, setting motion to a triumphant underdog story.

May be patronizing the lower end of the blue-collar mentality, as much if not more than the characters who keep putting Rocky down on the screen.

The screenplay is purest Hollywood make-believe... there would be nothing wrong with that, had the film been executed with any verve.

Rocky isn't about a story, it's about a hero. And it's inhabited with supreme confidence by a star.

Delivers some cracking punches, both literally and emotionally.

The memorable combination of the torturous gym workouts, the runs through the streets of Philadelphia and the carcass-beating in the abattoir all combine beautifully.