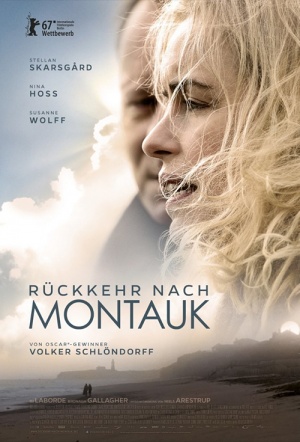 "Max Zorn (Skarsgård), a writer in his early sixties, travels to New York to launch his new book. His wife Clara (Susanne Wolff) is expecting him; she has been working on the book’s publication for the American publisher. Zorn’s very personal novel tells the story of a great but failed love affair. Max soon meets the woman who was the target of his affections at the time, German-born Rebecca (Hoss), now a successful lawyer in New York. The pair return to Montauk for one winter weekend in this small coastal town on Long Island where they were once so happy together. Rebecca is distant and hurt. Max tries to get close to her. They talk about their years apart, rekindling memories of their shared past. But is there a future for the feelings they once had for each other?" (Berlin International Film Festival)

"Return to Montauk" is Volker Schlöndorff's tasteful, high-minded Euro-literate version of a Lifetime Movie - and I mean that (mostly) as a compliment.

Nothing really rings true in Return to Montauk until the pain breaks through and the tears start to flow. Perhaps that's the point.

What energy the picture had in New York's literary world dissipates as the film turns into the kind of conversation which is only really interesting for the two people it concerns.

[An] emotionally inert drama about an author trying to reanimate the past.