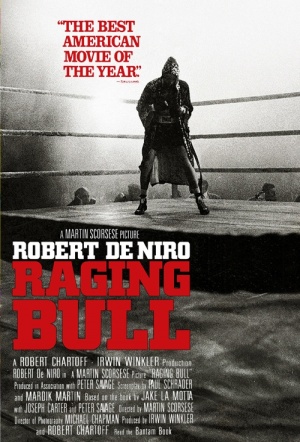 Martin Scorsese's classic black and white biopic on self-destructive boxer Jake LaMotta (Robert De Niro in Oscar-winning form). The prizefighter’s devastating rage helps him rise to the top of the ring, but destroys his life outside it. Nominated for eight Academy Awards including Best Director and Supporting Actor Joe Pesci. Co-written by Paul Schrader, in his second collaboration with Scorsese after 1976's Taxi Driver.

Scorsese makes pictures about the kinds of people you wouldn't want to know.

Scorsese's luminous study of a man at war with his own nature remains undimmed after almost 30 years.

When has a performer as fully and uniquely sacrificed himself to the moving-picture cause as De Niro?

A big film, its territory being the landscape of the soul.

De Niro and Joe Pesci are impeccable and Cathy Moriarty is iconically sexy.

It's the best film I've seen about the low self-esteem, sexual inadequacy and fear that lead some men to abuse women.