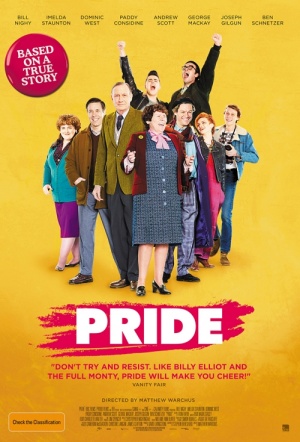 At the Gay Pride March in London '84, a group of gay and lesbian activists decide to raise money to support the families of the striking miners. Though the Union seems embarrassed to receive their support, the activists are not deterred. They decide to ignore the Union and go direct to the miners - setting off in a mini bus to the village in deepest Wales, to make their donation in person. So begins this true story of two seemingly alien communities who form a surprising partnership.

It ain’t easy to balance light comedy with heavy tragedy, but Pride pulls off that trick in fine style. Cut from the same kitchen sink comedy cloth as Brit hits The Full Monty, Billy Elliott, Brassed Off and Made in Dagenham, this is the based-on-a-true-story tale of the London lesbian, gay, bi and queer activists who raised money to help striking Welsh miners in the early 1980s. Cue much moving, and often hilarious, embarrassment as homophobic working class Welsh miners come to terms with accepting assistance from people whose sexuality gives them the willies.

So warmhearted, its themes of friendship and mutual respect so resonant, that few will begrudge it such heightened moments.

Will have you clutching your sides, wiping your eyes and punching the air in triumph.

A joyous film, full of love and warmth but unafraid to admit that with sticking out your neck comes struggle and sorrow. Truly lovely.

The kind of hearty, blunt-force drama with softened edges that leaves audiences applauding and teary-eyed.

It is warm and witty, with terrific performances; Beresford's script is fast and funny and there's a rousing musical score from Chris Nightingale.

A crowd-pleasing throwback to those films that pushes every formulaic button but is no less entertaining for it.

A clear winner that makes you laugh, cry, and generally want to party and parade like it’s 1984.