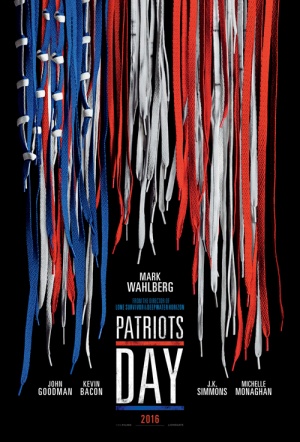 In the aftermath of an unspeakable act of terror, Police Sergeant Tommy Saunders (Wahlberg) joins courageous survivors, first responders and investigators in a race against the clock to hunt down the bombers before they strike again. Weaving together the stories of Special Agent Richard Deslauriers (Bacon), Police Commissioner Ed Davis (Goodman), Sergeant Jeffrey Pugliese (Simmons) and nurse Carol Saunders (Monaghan) this chronicle captures the suspense of the most sophisticated manhunt in law enforcement history and the strength of the people of Boston.

Hopefully it’s just a bizarre coincidence, rather than a sign of things to come, that the release of Boston Marathon Bombing pic Patriots Day coincided with President Trump’s ugly, un-American, anti-Muslim travel ban this week. Then again, as Peter Berg’s depiction of 2013’s domestic terror attack slides uncomfortably close to liberal propaganda in closing minutes, perhaps he saw this sort of unpleasantness coming, this being somewhat of an over-reaction.

An intense, jittery re-creation of the 2013 Boston Marathon bombing and the four-day manhunt that followed, "Patriots Day" is the movie CBS Films was put on this earth to produce.

Balancing the perspectives of perpetrators, policemen and victims with wiry tension and tender human interest, it's not entirely the rah-rah flag-waving exercise the title promises.

"Patriots Day" works so well on a dramatic level that my qualms were silenced almost entirely from the start.

The tension that slowly builds as the inevitable finally happens is brilliantly wrought, with the score - provided by Trent Reznor and Atticus Ross - proving a swelling drone which creeps up and peaks in all the right places.

Hits the marks it needs to, gets the broad strokes of the story right and never feels too exploitative, politicised or sensationalised.

Whether they are celebrated filmmakers or ordinary folks, tragedy can bring out the best in people, and "Patriots Day" is the latest example of both sides of the equation.

Like the heroic Bostonians it celebrates, civilians and law enforcement both, Peter Berg's Patriots Day gets the job done.

...a very good film, when it should have been a great one.