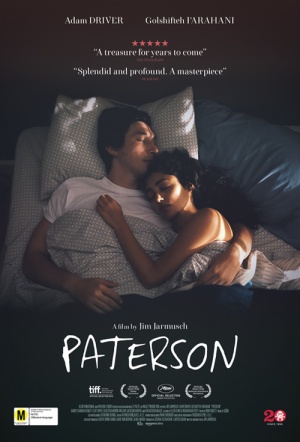 "Paterson is a bus driver in the city of Paterson, New Jersey – they share the name. Every day, Paterson adheres to a simple routine: he drives his daily route, observing the city as it drifts across his windshield and overhearing fragments of conversation swirling around him; he writes poetry into a notebook; he walks his dog; he stops in a bar and drinks exactly one beer; he goes home to his wife, Laura. By contrast, Laura's world is ever changing. New dreams come to her almost daily. Paterson loves Laura and she loves him. He supports her newfound ambitions; she champions his gift for poetry. The film quietly observes the triumphs and defeats of daily life, along with the poetry evident in its smallest details." (Cannes)

Weird, magical details loom at the edges of Paterson, but they aren’t its main consideration. Director Jim Jarmusch is more concerned with celebrating ordinary people and the rituals that make up their days.

The appeal of the Jarmusch vision shrinks down - in every way - to something relatively minimal.

A mesmeric treat of a film - one of Jarmusch's best.

A lovely fable about the fragile, fruitful and occasionally fraught relationship between creativity and everyday life.

It's a thrilling rumination on the mimetic aspects of poetry, the inexplicable drive towards creativity and the search for meaning in the most simple acts of human expression.

Slowly but surely, the gentleness of Jim Jarmusch's lovely new film steals up on you.

Jarmusch's film, like its main character is almost an anachronism in these modern times, a thoughtful, sedate, slowly-unfolding narrative that rewards patience.

A delightful, meandering meditation on finding art and beauty in the most ordinary of places.

Everything is structured to evoke poetry through its measured pacing. The space left between events and interactions shows Jarmusch at his most poised.

A mild-mannered, almost startlingly undramatic work that offers discreet pleasures to longtime fans of the New York indie-scene veteran, who can always be counted on to go his own way.

Quiet, thoughtful and deeply human, this is one of Jarmusch's finest and features Adam Driver's best performance yet - although you do risk coming out with a new affection for modernist poetry.