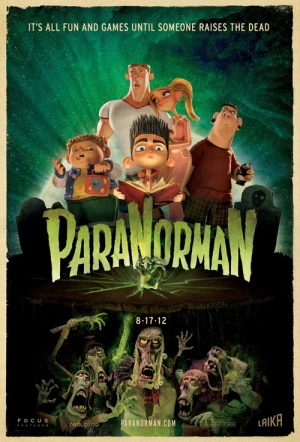 Stop-motion animated zombie comedy from the makers of Coraline about a spooky, misunderstood boy called on to save his small town from the undead, a centuries-old curse and - worst of all - moronic grown-ups. "Ghoul whisperer" Norman is voiced by Kodi Smit-McPhee (Let Me In). The voice cast also includes John Goodman, Leslie Mann, Anna Kendrick, Casey Affleck and Jeff Garlin.

Norman's a boy with a special ability that allows him to communicate with the dead, but neither his family nor other kids believe him, making him somewhat of an outcast in the town of Blithe Hollow. When a witch's curse raises a legion of zombies, however, Norman turns out to be the boy for the job of stopping them - thanks to the advice of a recently-deceased uncle.

Few movies so taken with death have felt so rudely alive as ParaNorman, the latest handcrafted marvel from the stop-motion artists at Laika.

The story is principally a vehicle for the movie's meticulously detailed pictorial beauty, which turns each scene into an occasion for discovery and sometimes delight.

It's an engaging entertainment, with a solidly constructed storyline.

It may be the most fun you'll have with ghosts and zombies all year.

There's no meat on the bone of this skeleton. Witty and fast-paced, sure, but the film lacks substance.

Cries out for more activity.

Ingenious and wonderfully detailed, though better in its imaginative horror than its slightly too-broad comic knockabout.

The results are breathtakingly chilling, but it's easy to wonder what heights ParaNorman could have reached by doing one thing that well throughout...