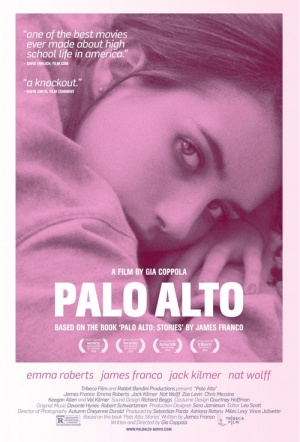 The feature debut from writer-director Gia Coppola (the granddaughter of Francis Ford and niece of Sofia Coppola), based on the book of short stories written by James Franco. The complicated relationships, heightened emotions and romantic highs and lows of adolescence are explored in intertwining high school stories set in northern California.

"Emma Roberts plays April, a level-headed, intelligent, and spirited young woman who finds herself attracted to introspective artist Teddy (Jack Kilmer), whose buddy Fred's (Nat Wolff) destructive nihilism brings Teddy down with him. When her soccer coach (James Franco) comes onto her, April's world begins to spiral out of her control. One party bleeds into another as April and Teddy finally acknowledge their mutual affection, and Fred's escalating recklessness spirals into chaos. With the vast majority of the film taking place outside of high school halls and classrooms, the characters are imbued with depth, as their carefully crafted lives are reflected in their dress, their bedrooms, and their actions." (Tribeca Film Festival)

Coppola proves to have quite the eye, if not quite the natural storytelling instinct of her cinematic kin, serving up a remarkably assured feature debut.

A very promising debut... a lyrical tale of West Coast adolescent angst. Coppola’s sensitivity is always evident, especially in the open-hearted performances she gets from Roberts and Kilmer.

A drifty, appealing story, about that twilight period between childhood's end and the start of young adulthood.

It's about the blank spaces in teenage heads and lives, and what they do to fill them.

[The] film's profound identification with its teenage characters is ultimately its saving grace.