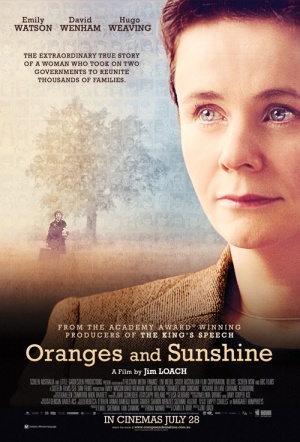 The true story of Margaret Humphreys (Emily Watson, Cemetery Junction), a social worker from Nottingham who uncovered one of the most significant social scandals in recent times: the organised, forced deportation of more than 100,000 poor and orphaned children from the United Kingdom to Australia, New Zealand, South Africa and Canada. The scheme began in the 1800s and ended in the late 1960s. UK Prime Minister Gordon Brown made a formal apology to affected families in 2010.

Almost single-handedly and against the odds, Humphreys reunited thousands of families, brought authorities to account and brought worldwide attention to this miscarriage of justice.

Also starring Hugo Weaving (The Matrix), this is the feature debut from director Jim 'son of Ken' Loach.

In the best tradition of British social realism, Denson Baker's largely handheld camera is steady and unobtrusive; Lisa Gerrard's lovely score is discreetly applied. All other technical aspects are top-notch.

There’s a lot to be said for such heart-wrenching drama that doesn’t fall into the easy trap of mawkishness or manipulation – Loach has cast actors capable of dealing with raw scenes in a spare yet deeply moving way.