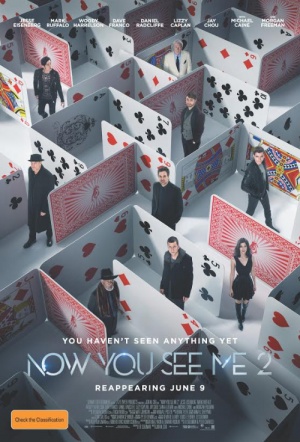 The Four Horsemen – Jesse Eisenberg, Woody Harrelson, Dave Franco and Lizzy Caplan (replacing Isla Fisher) – are back in this sequel to the 2013 illusionist heist adventure. This time, they’re joined by a familiar-looking magician… Daniel Radcliffe.

One year after outwitting the FBI and winning the public's adulation with their Robin Hood-style magic spectacles, the Horsemen resurface for a comeback performance in hopes of exposing the unethical practices of a tech magnate. The man behind their vanishing act is none other than Walter Mabry (Radcliffe), a tech prodigy who threatens the Horsemen into pulling off their most impossible heist yet. Their only hope is to perform one last unprecedented stunt to clear their names and reveal the mastermind behind it all.

The sequel that should have been called Now You Don’t is slightly better than the first Now You See Me. That’ll either have you super excited or completely uninterested in this follow-up. Hopefully you’re the former, because that means you’ll happily forgive some preposterous and downright stupid stuff in order to see some pretty nifty set pieces.

A madly spinning top of a movie, powered by an eagerness to please that somehow comes off as more innocent than calculated.

I have fond memories of Louis Leterrier's cheerfully ridiculous 2013 caper Now You See Me, but I didn't really need another one.

From that vastly unpromising, tedious, predictable and then laughably bad opening stanza, Now You See Me 2 just gets steadily worse.

No less than in the glossy caper's 2013 predecessor, the plot rides a surging tide of ridiculousness and culminates in a pileup of unconvincing explanations.

Arrestingly entertaining from beginning to end.