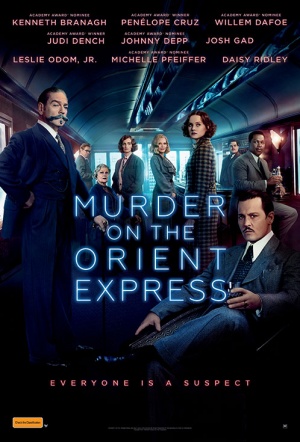 In an attempt to do what Guy Ritchie did for Sherlock Holmes in 2010, respected cinema thespian and filmmaker Kenneth Branagh dips Agatha Christie’s classic murder mystery novel into a big-budget paint-bucket. It certainly looks pretty, spouting lavish costuming alongside impeccable set design, and Haris Zambarloukos – Branagh’s regular cinematographer – aids the production with a wealth of creative camera choices.

Kenneth Branagh's take on Agatha Christie's eccentric detective is one for the age.

Shooting in 65mm, Branagh delivers all of the eye-saucering exteriors you'd expect, as mountaintops soar, sunlight glints at the end of tunnels and stations snuggle under a duvet of blue snow.

If it's all a little too crowded with characters, Branagh's pacy direction keeps the story zipping along.

This film never gets up a head of steam.

Seemingly reimagined Poirot as someone who chuckles through Charles Dickens' novels and has a love interest. What on earth would Christie say?

Branagh delivers a thrilling ride through the mountainous snowscapes, making this first-class ticket as opulent as it is chilling.

Unfortunately, it's almost as if this Orient Express has been slightly derailed by the narrative it leaves on the line as it departs the cinematic platform.

Branagh’s attempt at a Christie is certainly handsome and not without a few sly grins, but there’s something frustratingly stuffy and pedestrian about it...

An old-fashioned murder mystery repackaged from the blockbuster set. Works despite itself.

Given the confined nature of the material as well as its period-specific aspects, this is a yarn that does not exactly invite radical reinterpretation. As such, its appeal is confined to the traditional niceties of being a clever tale well told.

Branagh adheres to Christie's ideal with his performance but remains in the shadow of TV's David Suchet.