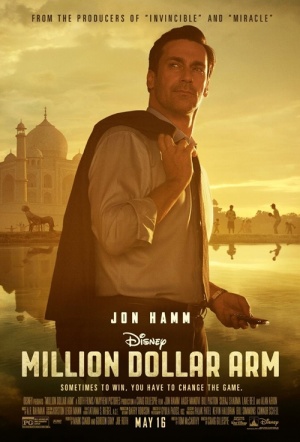 The show uncovers two fast-pitching young men in Dinesh Patel (Mittal) and Rinku Singh (Sharma), both from extremely poor families. Despite the pair never having seen a game of baseball and being unable to speak English, Bernstein brings them to America for training before setting his sights on Professional League contracts.

What’s not to love about Jon Hamm? The Mad Men star continues to get away with Draper-like behaviour (of the family-friendly variety) in this unconventional true story, told in a conventional way. Hamm plays real-life sports agent J.B. Bernstein, who travelled to India to produce a reality TV show competition to get young Indian cricketers to give baseball a shot in the U.S.

Hamm does an amiable riff on his Don Draper persona, Lake Bell is a delight as his tart-tongued love interest, and Sharma and Mittal are all charm as the cultures-uniting underdogs.

The only splash of cold water comes from Lake Bell as J.B.’s bohemian tenant, who pops his bubble of self-importance (and the film’s) whenever she gets the opportunity...

Hamm is first-rate, his nuanced portrayal lifting the movie to the winner's circle.

Credit a rock solid turn by lead Jon Hamm that doesn’t shy away from revealing a darker underbelly to his underdog character...