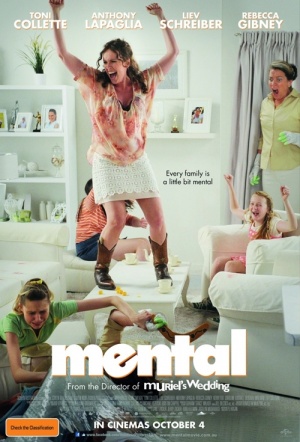 Australian comedy-drama, from the director of Muriel's Wedding, with Toni Collette as the wild and hot-headed Shaz, the new nanny to five girls who are certain they all suffer from some kind of undiagnosed mental illness.

The Moochmore girls' mother Shirley (Rebecca Gibney), unable to cope with her daughters and philandering politician husband Barry (Anthony LaPaglia), suffers a nervous breakdown. After Barry commits his wife to a mental hospital (telling his constituents that she's "on holiday") he finds himself alone with the five teenagers he barely knows. Desperate, he impulsively picks up hitchhiker Shaz and installs her in his home as nanny to his daughters.

Mental's flaws are never fatal, and its commitment to an unhinged, sometimes episodic, contrast between the crass and the poignant is a welcome comeback from a filmmaker whose Hollywood sojourn became increasingly straitjacketed.

The crux of Mental's irksome inability to entertain is that a majority of its comedy scenes resolutely fail in their goal to change perceptions of psychiatric illness.

If you are willing to go along with the darker comedy, the outrageous nature of many scenes will leave you laughing openly.