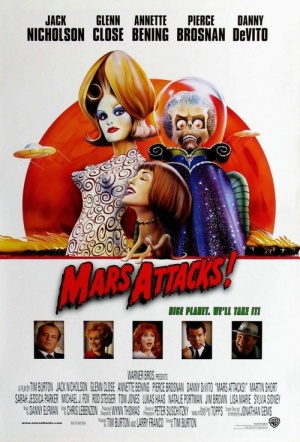 Tim Burton directs this comedic love letter to science fiction B-movies where Earth is invaded by aliens who possess an horrific sense of humour. Stars Jack Nicholson, Annette Bening, Michael J. Fox, Danny DeVito and Sarah Jessica Parker. The film's concept and look is based on a 1960 trading card series.

When Martians are spotted orbiting Earth, the President of the United States (Nicholson) lays down the welcoming mat and the visitors claim to “come in peace”. But as a hippie releases a dove into the air, the gesture is misinterpreted and the Martians swiftly begin to decimate the gathered humans and our puny armed forces. Before long, the Martians begin a chaotic invasion of Earth that’ll test the survival instincts of New York news anchors, Vegas hotel employees and Kansas trailer trash alike.