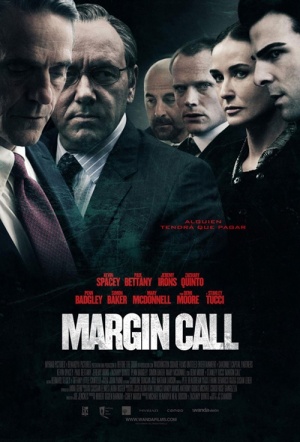 "When entry-level analyst Peter Sullivan (Zachary Quinto) unlocks information that could prove to be the downfall of the firm, a roller-coaster ride ensues as decisions both financial and moral catapult the lives of all involved to the brink of disaster... an examination of the human components of a subject too often relegated to partisan issues of black and white. A portrayal of the financial industry and its denizens as they confront the decisions that shape our global future." (Sundance Film Festival 2011)

J.C. Chandor's precocious writing-directing debut is fastidious, smart and more than a bit portentous as it probes the human costs of unchecked greed.

Steering clear of overt condemnation or adulation of morally dubious characters, this is sophisticated cinema that respects the audience’s ability to follow complex subject matter.

Escalation is the main thing Margin Call has going for it, as more substantial actors are trotted out to have their way with Chandor's realistic-sounding boardroom dialogue.

Margin Call is smart, but too cool and solemn to raise anyone's temperature. Nonetheless, writer/director J. C. Chandor should count himself the luckiest man in show business this weekend. How many first-time feature filmmakers can truthfully claim that their movie collided right up against the zeitgeist?

The accomplishment of this movie is that it allows you to sympathize with them, to acknowledge the reality of their predicament, without letting them off the hook or forgetting the damage they did.

Spacey is watchable as the veteran trading boss, in a state of near-breakdown, who discovers all too late that he has a kind of conscience.

Margin Call is an explosive drama that speaks lucidly and scarily to the times we live in.

The first-rate cast cannot be faulted. Chandor has assembled an extraordinary ensemble.

Chock-full of terrific performances, Margin Call is the kind of gripping, grown-up film that these days is usually found on the small screen.

If nothing else, Margin Call serves as a rebuke to "Wall Street: Money Never Sleeps" emphatic style - which ultimately glamorizes the profession it means to shame - and brings this dangerous numbers game back to the trading-floor desktops and mahogany-covered conference tables where it belongs. It isn't sexy, but the stakes feel much higher.