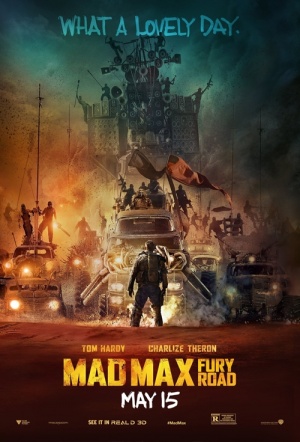 Set in the furthest reaches of our planet, in a stark desert landscape where humanity is fighting over the necessities of life. There are two rebels who can restore order: there’s Max (Hardy), and Furiosa (Theron) - a woman who believes her path to survival is across the desert, back to her homeland.

The brutal Mad Max universe hasn’t gotten any softer with time, nor has director George Miller, now in his 70s and revisiting the devastated future he last brought to the screen in 1985’s Beyond Thunderdome. Essentially a two-hour chase, Fury Road is a brilliant example of a broad palette of filmmaking techniques applied in service of a gripping thrill-ride that seldom relents.

Fury Road manages to be at once familiar and yet consistently surprising...

(A) barn-burner of a post-apocalyptic extravaganza in which sizzling, unsettling images are the order of the day.

This is what happens when you lay out all your crazy on the screen at once: glorious, crackling entertainment.

A gorgeous, scrap-metal demolition derby of a popcorn picture.

Somehow, this explosive new barrage of action and eccentricity isn’t only a faithful continuation of the (Mad Max) series, it’s also its exhilarating high point.

Even after two viewings, I feel as though I've only scratched the surface of Mad Max: Fury Road.

The film’s post-apocalyptic wasteland is a marvel to behold and festers inside one of the best action films we’ve seen in decades.

(Furiosa is) the human touch in this inhumane world and the madly beating heart of this technical wonder of a movie.

"Worth the wait" still seems a puny response to the two hours of ferocious, unfettered B-movie bliss offered by Mad Max: Fury Road.

The maxed-out madness of Mad Max sets an extraordinarily high bar - then pole-vaults clean over it and smashes the entire rig to smithereens.

Exhilarating... Pretty much the entire film is a screaming death race down Fury Road.

Miller pours his heart and soul into some truly visionary and gonzo sequences of vehicular carnage. Kinetic, yet oddly distancing, the film pummels you into awed submission.

This madly entertaining new action extravaganza energetically kicks more ass, as well as all other parts of the anatomy, than any film ever made by a 70-year-old - and does so far more skillfully than those turned out by most young turks half his age.

Max's re-enfranchisement is a triumph of barking-mad imagination, jaw-dropping action, crackpot humour, and acting in the face of a hurricane.