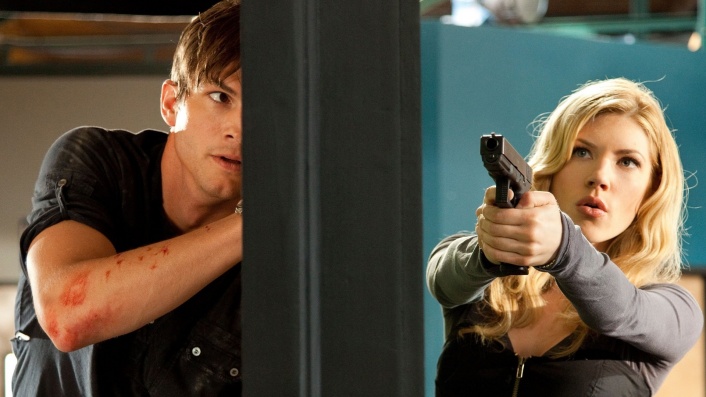 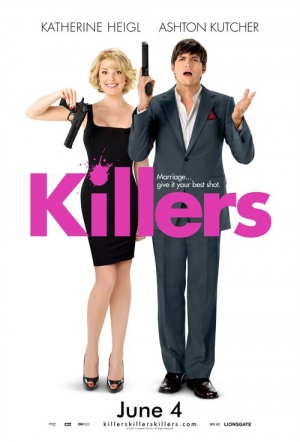 Action-comedy from the director of Legally Blonde and The Ugly Truth with Ashton Kutcher and Katherine Heigl playing a married couple on the run from hired killers.

Spencer (Kutcher) is your run-of-the-mill undercover, government-hired super-assassin accustomed to a life of exotic European locales, sports cars and lovely ladies. Then he meets Jen (Heigl), an IT woman recovering from a bad break-up. They fall in love and Spencer hangs up his undercover boots. Three years later, the couple are living a picture-perfect marriage when he becomes the target of a multi-million dollar hit. The hired killers have been stalking the happy couple for years, and could be someone they know. So they take flight while trying to find out who wants Spencer dead, save their marriage, manage the in-laws and keep up neighbourly appearances.

Bullets fly and jokes land with a thud in Killers, a deadly dull hubby's-a-hit man farce that alternately resembles a knockoff of 2005's "Mr. and Mrs. Smith" and a rehash of "Knight & Day" avant la lettre .

Katherine Heigl does her career few favours and Ashton Kutcher appears lost in a barely interested daze in this chuckle-lite misfire. Dispiriting, disappointing and deeply dull.

Unless you’re trapped on an airplane or enjoying movie night at the penitentiary, you have no excuse for watching Killers. A brain-deadening collision of high concept and low standards.

Is it some monstrosity of awfulness, as its lack of advance screening suggested? No, that would imply at least a spark of some kind. This is just an empty summer hodgepodge of stale romantic comedy exchanges, witlessness and lackluster action.

An action comedy that nearly renders the term an oxymoron, Killers is devoid of suspense and laughs.

Heigl and Kutcher make a cute enough couple, but a cringeworthy opening and ludicrous (even by the standards of the genre) ending mean that this is one to watch only when your brain is switched to the “off” position.

It seems it's no longer enough for a movie to be simply a romance, or a romantic-comedy.